Beer is as Bavarian as apple pie is American. Celebrate the lifeblood of Munich in its beer halls and at Oktoberfest, Germany’s largest beer festival.

Oktoberfest began on October 12 in 1810 as a wedding party on the fields in front of the Munich city gates, celebrating the marriage of a Bavarian prince (later King Ludwig I) to Princess Therese of Saxe-Hildburghausen. Over the years, what started as a wedding anniversary celebrated with beer, somehow became a celebration of beer itself.

Today, Oktoberfest attracts six million beer lovers from around the world over its 16 to 18 days. It actually starts in September, the schedule varying from year to year: 16th September to 3rd October in 2017, and 22nd September to 7th October in 2018.

Choose from 14 enormous marquees, each seating up to 10,000 jolly revellers, specialising in different ales and Bavarian delicacies, each with its own style. Try tender veal prepared in countless ways at the KalbsBraterei, or join in the singing and dancing at the Hofbräu-Festzelt tent, with its traditional oompah brass band. You’ll also find smaller tents seating up to 500, including even the non-beer Bodo’s, serving cocktails, champagne and pastries.

Oktoberfest ales are strong, at 6% to 8% alcohol, and served in Masses, one-litre flagons. All adhere to a 500-year-old Bavarian beer purity law and are made only with water, barley and hops. Locals are more used to it, so compete with them at your own risk. Some Oktoberfesters alternate rounds with Radler (shandy) to avoid ending up as a Bierleiche (‘beer corpse’). Despite all the drinking, the Oktoberfest atmosphere is family-friendly, with the party tempo kicking up in the evenings. Children are allowed until 8pm accompanied by an adult.

It’s great fun to look the part in traditional peasant dress, and it’s easy to buy or rent your own Lederhosen (leather breeches) and Dirndls (traditional dresses) of varying quality in Munich, from cheap, disposable outfits to bespoke, designer versions. Traditionally, women who tie their Dirndl bow on the left are signalling they’re open to someone offering to buy them a drink, a tradition still widely observed.

Consider reserving seats, especially if you’re in a group, although on weekends one-third of bench spots are kept free until mid-afternoon. At every tent, you can buy tokens beforehand and use them to pay for beer (which is around €9 – €11 per ‘mass’ – 1 litre of beer).

From Hofbräuhaus to Airbräu: The Best Munich Beer halls

The celebration of beer in Munich doesn’t end with Oktoberfest. Beer continues to be enjoyed throughout the year in the treasured Munich neighbourhood beer halls. The 16th century Hofbräuhaus is one of the best known and the most atmospheric. Owned by the Bavarian government, Hofbräuhaus is the elder statesman of beer halls, with a vast, barrel-roofed main drinking chamber, chestnut trees in the garden and Bavarian oompah bands to keep the jolliness level high.

Other Munich beer halls of note include the city’s largest, beneath the Chinese Tower in the sprawling English Garden city park, seating 7,000 drinkers; the Olympia Park beer garden, retro venue for the 1972 summer Games, with great city views from the Olympic Tower; the Paulaner am Nockherberg, voted Munich’s best beer garden five times; and, for a final taste of Munich, Airbräu, a beer garden at the airport – try a glass of the unfiltered house special. 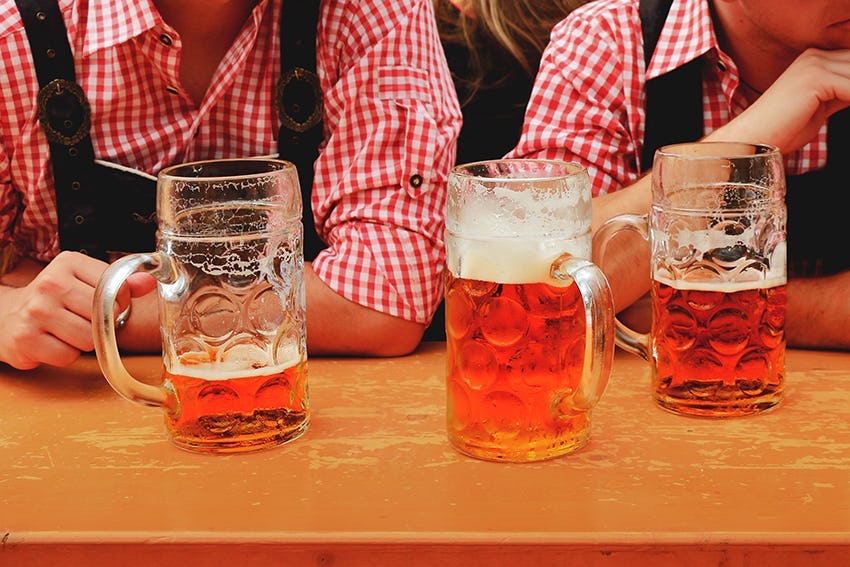 The Munich Landmarks You Must See

West End Glam: Where to See the Best Shows in London